SageData is based in Ottawa, Ontario, Canada

NFC, or Near Field Communication, is a subset of RFID. It is similar to HF RFID, and is characterized by simple tags with very short range, typically half an inch. Asset Management systems in the past typically used barcode technology to provide a unique identification that could be machine read, enabling a physical item to be quickly and accurately identified. NFC technology can replace the barcodes in such a system, provided that an NFC enabled reader is used to conduct audits and track moves.

Over recent years physical asset management systems have typically used barcode technology to identify an asset. This is a mature technology, and a wide range of readers are available. Readers for use with laptops and desktop workstations typically cost a few hundred dollars, and most users opt for the cordless version, more for reliability than convenience. Mobile readers are usually rugged, and usually more expensive.

In many applications barcode technology fully meets all the needs of the user, but there are a few issues that crop up from time to time, including:
- the cost of the reader
- the possibility of damage to the tags
- the cost of the tag (vs passive RFID)

Cost of the reader 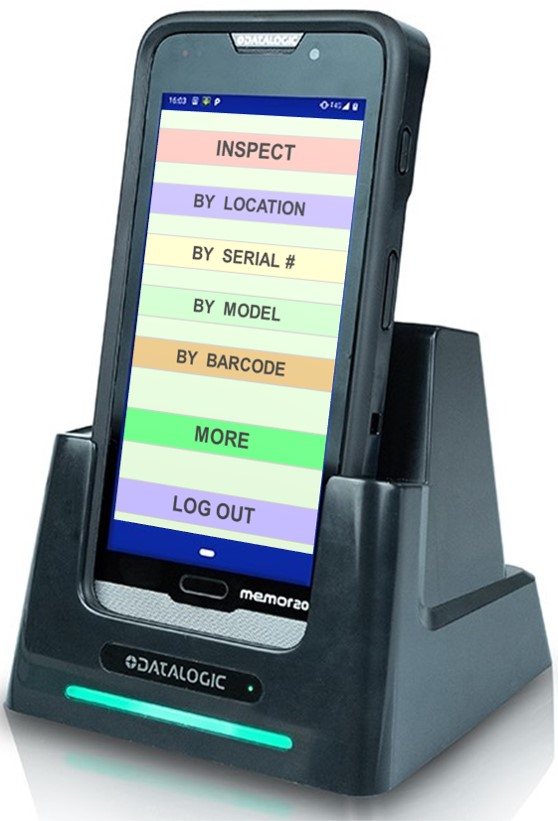 The NFC reader scores on all points. It is cheaper to manufacture, more rugged, and, because it is an essential element in modern smartphones, benefits from economies of scale, using components that are produced in the tens of millions. An NFC reader can be attached to a mobile computer more cheaply than a barcode reader, because it is so simple, basically a simple antenna and some chips, no optics.

And of course, you can always just use a smartphone, either at the primary tool, or as an emergency substitute. Rugged purpose built mobile handheld computers are available, but smartphones are less expensive, again because of the economies of scale.

Integrity of the tag

barcoded labels are fine in a library, or tracking file folders, but can be subject to harsh treatment in other applications. Tool crib applications are one example. Barcode labels can be torn, scratched, and covered in mud or grease, making them unreadable. They can also be difficult to apply securely, particularly on surfaces that are patterned.

Cost of the tag

At what range can a barcode, NFC and UHF passive tag be read? Typical barcodes can be read from three to twelve inches, though larger tags with special readers can be read at thirty feet. There are very few applications that justify that set up. NFC tags have very limited range, typically half an inch - or ten mm for the metrically inclined. But this is not necessarily a problem, and can sometimes be an advantage. Passive UHF can be read up to 100 yards (OK, say roughly 100 metres) with the proper equipment, which in this can would be a fixed mount reader.

Pros and Cons on range

The comparison here is between NFC and Passive UHF. With NFC the read is always clean and reliable. You know where to put the reader, and you know when you have a read, and which tag you read. But with UHF there are a range (no pun) of issues to consider. Orientation matters - you can't read an RFID tag end on. And which tag are you reading? We have a situation today where a client pointed a reader at a local tag, but the reader failed to co-operate, ignoring the local tag and reading one six feet away.

So NFC wins in this circumstance because it gives a clear, accurate read, and you have a high level of confidence in knowing which tag was read.

Barcodes, UHF Passive and NFC all have strengths and weaknesses which suit them for particular applications. For many cases where asset management is the prime objective the low cost of tags, the ruggedness of the tag, and the low cost of readers will make NFC the best choice.

If you found this useful, you might also want to review:

-  an introduction to barcode technology

-  an introduction to RFID

-  consulting services: barcodes and their applications